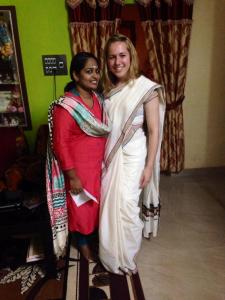 I initially viewed CREST through the lens of Freire’s pedagogy of oppression, where the oppressed can only be freed from their position through a change in individual consciousness, which is accomplished through problem-posing education and critical thinking on social issues.

However, within the formal curriculum at CREST, I did not witness any explicit discussions of caste discrimination. Based on my own background and the expectations that I carried when entering CREST, I was uncertain about the course’s lack of critical dialogue, and its focus on English communication and building technical skills. However, as I discovered through my time at CREST, learning skills is essential to the student’s’ survival. As the educationalist Lisa Delpit states: “Students need technical skills to open doors, but they need to be able to think critically and creatively in order to participate in meaningful and potentially liberating work inside those doors” (15).

As Delpit mentions, students must also be able to think critically within these systems, which does figure into CREST’s hidden curriculum to some extent. This hidden, or secondary, curriculum is what takes place outside of the formal curriculum: the breaks where students eat together, the time that students spend together at the hostel, and the drama workshop that the students attend. At the end of CREST’s program, the students participate in a two-week long theatre workshop. By discussing their feelings and hardships within an art-based program such as the theatre workshop, many students felt that they partook in a healing process. The workshop also strengthened the solidarity of their peer group and allowed them to apply the skills and language they learned in the formal curriculum to their past experiences and hardships, which many have previously had a hard time time articulating.

As such, the workshop leads to another positive learning situation, where students have the space to develop a language to advocate for themselves, which will be particularly relevant once they have gained access to a private sector job and are navigating that system. The creation of this safe space, that was developed naturally throughout the workshop, not only gave students a space to apply the skills they have learned, but to engage critically with their oppressions and hardships, and to develop a language of advocacy.