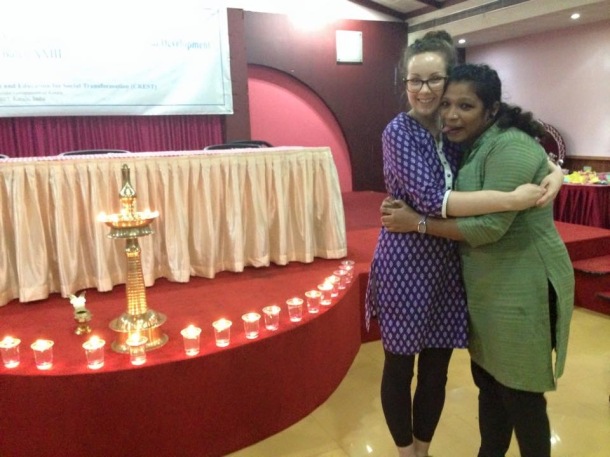 During my time at CREST, I observed three main spaces that the students in the CREST program occupied: the CREST campus, the student hostels, and the convent in which the theatre workshop occurred. The theatre workshop existed as a week-long culmination of Batch 23’s program, in which the students explored, utilized and reflected upon the skills they had attained through the program.  An art therapist in the form of a warm, kind woman from another state in India was brought in to lead the daily sessions. Games, writing and creative exercises, and a final theatrical performance were utilized to explore sense of self, sense of others, one’s goals and how to manoeuvre a social reality wrought with inequality.  Although sensitive and personal topics were covered during the workshop, the students never failed to put forth an air of optimism and progression.

The convent in which the theatre workshop took place was treated the same way as the hostel or campus was during free time. The students organized informal games during any lull in the lesson, and napped in large cross-gendered piles during chai breaks, using each other’s stomachs or arms as pillows. This suggests that although the workshop is part of their CREST curriculum, they perceived it as a more informal and playful space.

As friendly as the students are with my colleagues and myself, not being afraid to enter our personal space and converse in close proximity, they were even more so among themselves. One of the first things I noticed is how intimate the students were with each other; hands were held, arms were slung around shoulders or waists, and cuddling (either vertically or horizontally) was frequent. At first I found this befuddling; I was so used to associating such actions with people who are romantically involved, and thus at first assumed that my cultural connotation also extended here. I quickly realized this wasn’t the case, and that, as one informant put it, “we just really love our bros here”.  We were also told that this was not the case at the beginning of the program, and thus I can interpret the physical and emotional proximity that I witnessed between the students as a testament to the CREST’s program success.

Before my arrival at CREST, I was expecting a timid group of young adults who clammed up even further in my presence. Nothing could have been farther from the truth. Whether it was in the hostel, the CREST campus, the theatre workshop, or when crossing a busy street such as that which can only be found in India, the students moved with confidence. Their posture and assertive movements conveyed how comfortable they were in the spaces they occupied. Furthermore, they seamlessly and quickly melded me into their world; within a couple of days they were grabbing my hand when crossing the street without any more thought than as if I was one of them from the beginning. They joked, teased and cuddled up to me the way they do their peers, and any plan for extracurricular fun involved me, as if including me in their goings-on was as natural a thing as breathing. The 23rd batch of CREST students were confident in their world- so much so that a strange Canadian girl was no threat at all.