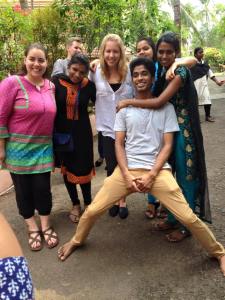 During my first week at CREST, I was shocked by the visible intimacy between students; they would hold hands, play games with each other, and hug each other often. This was in direct contrast to the interactions I had experienced in the public sphere, particularly on the bus, where women sit at the front and men sit in the back. I was told that often, expressions of love and intimacy, such as those at CREST, are condemned in public, insofar as youth demonstrating signs of affection have experienced harassment (referencing a recent news story of a couple kissing in a cafe, where the cafe was vandalized and the couple was violently harassed). Following this narrative, the students interact differently outside of the institution.

CREST disrupts the highly regulated public space of Calicut, creating a physical and imaginative space where students are able to create bonds with one another. This does something important. This space is exceptional and disruptive ­ it does not exist or work beyond CREST. However, the students carry with them this sense of solidarity, making the gains from the program sustainable. The true success of CREST lies in these unintended results: the way that space organically emerges as one of support and care. CREST carves out a space for students, away from the public gaze, where they can develop a social network on their own terms. CREST students have begun extending this space to the public sphere, particularly within youth­dominated places such as the Calicut beach and a park in the middle of town, challenging the regulation and norms of public space. The solidarity of their peer group has lasted past graduation and will hopefully act as a support system for them when they face future discrimination and difficult situations. This support network is enabled and sustained outside of the institution through social media, particularly through the messaging app Whatsapp, furthering the imaginative space that CREST has constructed.

This work is licensed under a Creative Commons Attribution-NonCommercial-ShareAlike 4.0 International License.