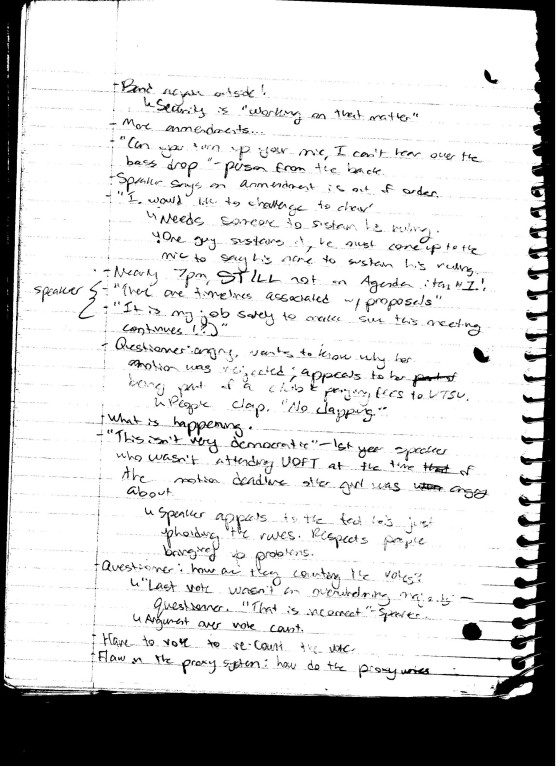 In the introduction to her book, The Will to Empower: Democratic Citizens and Other Subjects (1999), Barbara Cruikshank draws out a memorable ethnographic vignette of what her attention to “small things” was able to afford her. Around 1989, Cruikshank noticed one day that the garbage bins in her neighborhood had new padlocks. As a graduate student and welfare rights activist, she began to look for the reason and authority that enabled this minor change, a small thing that would have drastic effects for those who relied on dumpster diving as a primary means of subsistence. In this search, Cruikshank encountered a range of people who had a different account of the factors motivating the dumpster lock-up: a cashier at a local convenience store, a neighborhood activist, dumpster-diving college students, a convenience store manager, a grocery store manager, and food bank and soup kitchen staff. What was most puzzling was the conflicting and seemingly irrelevant explanations she came across, each with its own set of plausible and legitimating logics, however. She writes, “Insurance companies, the city, garbage contractors, neighborhood activists, store owners, all found that their (different) interests were served by the lockup…[yet] no common interest was articulated” (14).

Thinking through this “confluence of events” and taking seriously the importance of small things, Cruikshank pieces together that “What is required…is less a solution to the conundrum of the political and more a way to articulate the contingency of the political” (17, emphasis added). It is with this emphasis on “small and contingent things” that we were inspired to challenge and frustrate (our desire for) total coherence and intentionality in our own research projects. Small things became both an entry point and a middle. It helped us see the dynamic, tectonic, and highly situative circumstances and conditions that can give way to surprising things, unexpected things, unintended things, or even random things. Yet small things as method, practice, and theory also allowed us to understand and articulate this very incoherence in neither a paranoid or reparative manner. Instead, we were able to appreciate and puzzle over the convergence of that which is banal, untidy, shared, and laterally cursive.

A Small Thing – A Grand Piano

The following is a “small thing” – an ethnographic detail which might seem insignificant, but can serve as the basis of inquiry and theoretical analysis. The experience did not lead me to my final project, but I believe it really illustrates the importance of detailed observation.

After working out in the gym, I stroll around the building, exploring the different rooms. On the first floor, I hear beautiful classical piano music. I come to the large room which houses a grand piano, located right at the front of the building. I sit and enjoy the music, which is being played by a young man. After a few pieces, he stops, and rises. I ask him whether the piano is open to all students. His response is that one must have their Royal Conservatory of Music Grade 10 or ARCT (the highest level possible) and show proof of this to The Hub. I ask him if he’s being serious – yes, you must have your RCM Grade 10 or higher and bring your certificate to The Hub, and then you can sign up. He tells me that this is only the case for the grand piano – if you do not have your Grade 10, you can go to the basement and play the upright (an inferior instrument in an inferior acoustic space). A woman enters the room and is about to sit down at the piano, and the man tells her what he just told me. He then proceeds to lock the piano, and the woman leaves.

From this small thing – an occurrence which took place in less than five minutes, we are able to draw out several lines of inquiry and critique. First, a more surface-level reaction: I played classical piano for nearly a decade and only have my Grade 9 RCM. I am curious about the official reasoning behind the Grade 10 rule, as it excludes all but a tiny portion of students from accessing this instrument. The effect is that one would be unlikely to hear any type of music in that room other than classical. As well, if someone is a self-taught musician, they are out of luck. At the RCM website, I see that the Grade 10 exam is $399, and the ARCT is $665 – not everyone can afford this. This interaction raises many questions for me: How did the Grade 10/ARCT rule come into effect? Why did the man at the piano feel he had to stick to the rules when he could have easily let the woman play after him? How can we categorize these kinds of power (following John Allen’s refusal to generalize power)? What significance is there in the spacial dynamics present (The Hub as a locus of power, the piano in the basement vs the piano upstairs)?

My research project began—much like Barbara Cruikshank’s account of the dumpster lock-up—with a small thing: the new TCard policy at St. George campus. Effective as of June 2015, the new TCard policy states that for any UofT student to be issued a TCard, they must present not only university identification but also proof of citizenship. The documents required vary based on the student’s status as Canadian citizen, permanent resident, registration under the Indian Act, or as international student. As a migrant justice organizer, I was immediately jarred and disturbed by this reconfiguration of the student card office into a quasi-border enforcement apparatus. What would become of undocumented students who had bypassed the online application system when they, with both hope and trepidation, came to the TCard Office, only to realize in crushing dismay that they would not be able to attend university because of this small thing? What about undocumented students currently attending UofT who are now anxiously wondering what other kinds of status verification checkpoints this small thing might bring with it during their time here? What would become of them if they were to ever lose their TCard before graduation? How was it that this minor change, this small thing that carried devastating effects, came to be enforced?

Although these questions sat heavy in my mind, it was not in my belief that the university’s decision to enforce this policy was borne from a deliberate desire to exclude non-status students or students with precarious status as part of some malicious orchestration. From my experience, I knew that the issue of undocumented students was not even on the university’s agenda. Inspired by Cruikshank and valuing the insight that small things as method, practice, and theory offered me, I suspected that the new policy had more to do with bureaucracy and arbitrary legal safeguards than anything else. In an earlier reflection, I wrote about how, in 2012, students admitted from Toronto highschools were allowed to bring a letter addressed to them in lieu of a government-issued photo ID. Why would the institution ever allow something like this? Benevolence or convenience? Or was there some sort of miscommunication in the process?

During an interview with a current student worker at the TCard Office, my interlocutor expressed confusion over the puzzling nature of how the task of verifying legal status, and by extension, students’ appropriate fees categories came to be part of the job description for student library assistants (SLA). When asked about the kind of training they received upon getting the job at the TCard Office, he recalled that the majority of their training was based on learning the library cataloguing system. This, of course, makes a lot of sense since they are officially administrative staff for the library, not for admissions or enrolment services. Between benevolence and convenience, this situation erred more on the side of convenience. As many divisional college registrars put it, the TCard Office as a checkpoint made sense because all students must go through it in order to get their UofT email account, UTORid, and wireless internet connection. This situation illustrates what Nikolas Rose calls a “contingent lash-up” whereby “various problems of governing were resolved through drawing upon instruments and procedures that happened to be available, in which new ways of governing were invented in a rather ad hoc way” (1999:27; see also 276). With the definition of ad hoc as “for the particular end or case at hand without consideration of wider application” (Merriam-Webster), I see this dynamic and tendency as a small thing which gives way to a random thing, an aleatory encounter that is necessarily contingent (c.f. Althusser 2006).

This work is licensed under a Creative Commons Attribution-NonCommercial-ShareAlike 4.0 International License.